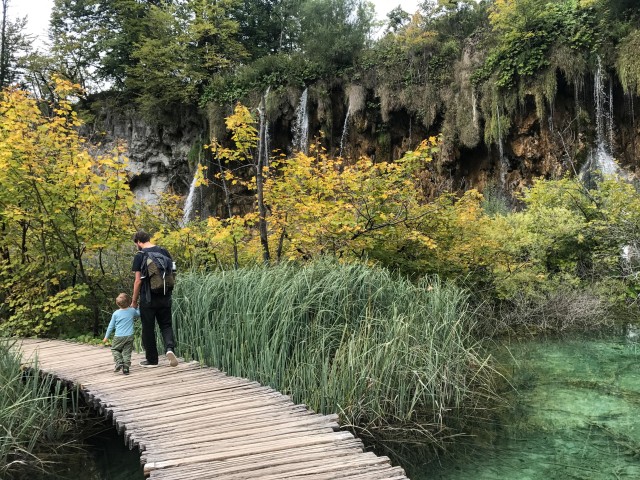 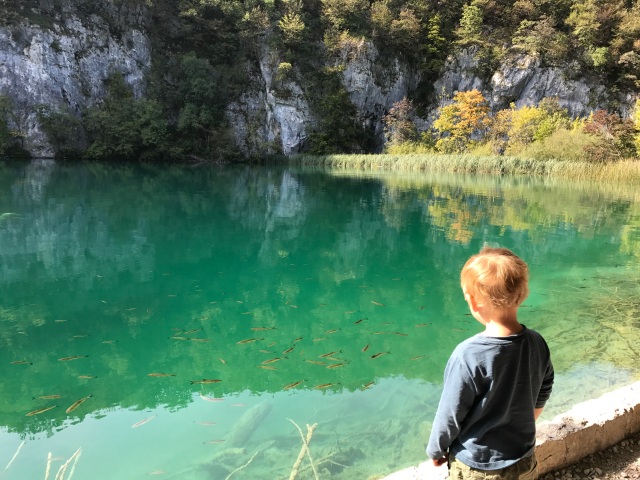 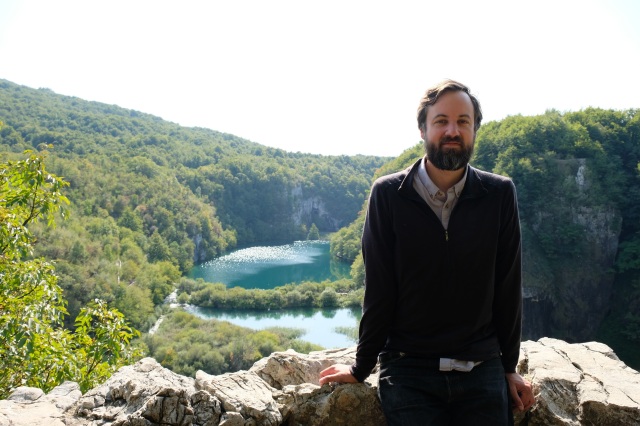 From Jelsa, we took a ferry back to Split and drove 3 hours on a nauseatingly windy mountain road up to what appeared to be the highest point in all of Croatia. Our mission: Plitvice Lakes National Park. We chose a small family-run guest house basically inside the park. Definitely felt remote but seemed like a good base from which to explore during our brief stay. And the air! So crisp and fresh!

When we arrived at the guest house, we were greeted by a young man, no older than maybe 18 or 19 (I really can’t tell how old people are anymore but he was young.) He said that unfortunately, his parents were out of town but he and his brother and sister were going to be in charge of the inn. Despite not being very adult-ish, the trio were very friendly and seemed capable.
We arrived in time for the traditional dinner prepared nightly for guests. On the menu: grilled trout (I’ve eaten enough fish to last me a lifetime at this point) and a nice pasta they whipped up just for Theo. We ate with the other guests, a young Thai couple on their honeymoon and an older English family. They were all so quiet! Theo was, well, decidedly not quiet as it was his usual bedtime by the time we were served food. I’d like to believe that we’re a quiet bunch by American standards, but by any other standard, it seems we are actually loud. We’ve noticed this a lot where we’ve been traveling. A crowded place will be surprisingly quiet. Speaking voices–even those belonging to children– are just more respectful and…softer maybe?
After dinner, our loud American child was D-O-N-E but they didn’t let us leave until they poured us some samples of their homemade liqueurs. One was walnut, one cherry, and one I can’t recall. They said the cherry one would help Theo sleep! Well, when in Croatia! Just kidding.

In the morning, we went on what we thought was a short hike but it ended up being an all-day affair. But that’s why we were at the lakes – to experience nature damn it, and experience it we did. Theo was pushed to his physical limits but he seemed to enjoy/tolerate the challenge. As he hiked on, he kept repeating to himself: “I’m a rough and tough guy. I’m a rough and tough guy.” But then when he was truly too tired to carry on, he would revert to: “I’m NOT rough and tough, I’m just a boy!” He was a champ though. Especially after we decided to bribe him with candy. One Skittle for every 5 minutes walked without complaint. And one for me, too.
I think the two full days we had in the park were sufficient. I’m glad we made it here: the scenery was out of this world and the unreal turquoise waters were just stunning. And at night, it was quite the experience to show Theo a sky full of stars.
But the lakes were way more popular with tourists than we had anticipated, especially in late September. Tour groups were just unloading one after the other on the trails. Seriously – at some points, it was single file marching. But other times, we were actually able to find pockets that were relatively empty and that was cool. Anyhow, we came, we saw, we hiked. Now off to Portugal!

One thought on “Hiking Plitvice Lakes”